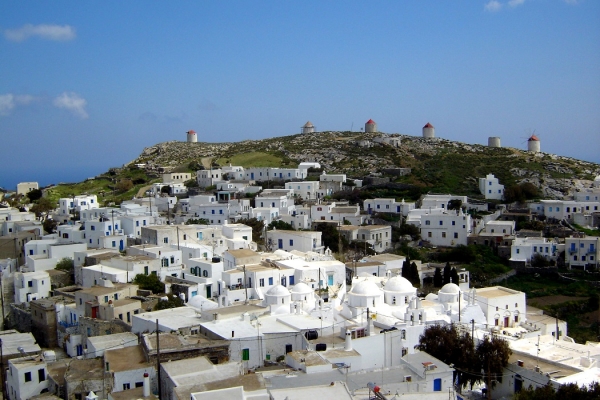 Along with several neighboring islets, the largest of which is Nikouria Island, it comprises the municipality of Amorgos, which has a land area of 126.346 square kilometres (48.782 square miles), and a population of 1,973 (2011 census).

Due to Amorgos' position opposite the ancient beaches of Ionian towns, such as Militos, Alikarnassos and Ephesos, it became one of the first places from which the Ionians passed through to the Cyclades Islands and onto the Greek mainland.

Amorgos features a lot of remnants of ancient civilizations. At the time of Archaic Greece, there were three independent city-states there. They are believed to have featured autonomous constitutions but the same currency. Amorgos is distinguished by the size and quality of the walls surrounding the city of Arkesini, by the ancient towers whose remains are scattered all over the island, by the ancient tombs, the stone tools, the inscriptions, the vases and by other antiquities.

Due to the name Minoa we suspect that Amorgos had been colonised by the Cretans from ancient times,[citation needed] but there are no archeological remains supporting this view.

'Kapsala Cycladic figurines', dating around 2700 B.C., are named after a find place in Amorgos. This is the earliest of the 'canonical types' -- a reclining female with folded arms. They tend to have slender and elongated proportions. At this time, anatomical features such as arms are modeled three-dimensionally. With the later types, sculptors tended to render this feature with incised lines.

Part of the island is named Aspis, where the ancient temple of the goddess Aphrodite stood.

In approximately 630 BC, the poet Semonides led the foundation of a Samian colony on Amorgos. With the passing of time, the island's name changed to Amolgon, Amourgon, Amorgian, and Amourgian. After the 5th century one can also find the name Amoulgos from Bishop Theodore who signed a Synod in Constantinople, as Theodore the Bishop of Parion, Sifnion, and Amoulgion. Skilax mentions it as Tripoli (the circumnavigation of the Cyclades Islands). It was known as "Yamurgi" during Ottoman rule between 1566-1829.

On 9 July 1953, a very powerful earthquake (7.5 on the Richter scale) with a consequent Tsunami at a height of circa 20m resulted in the deaths of 53 people.