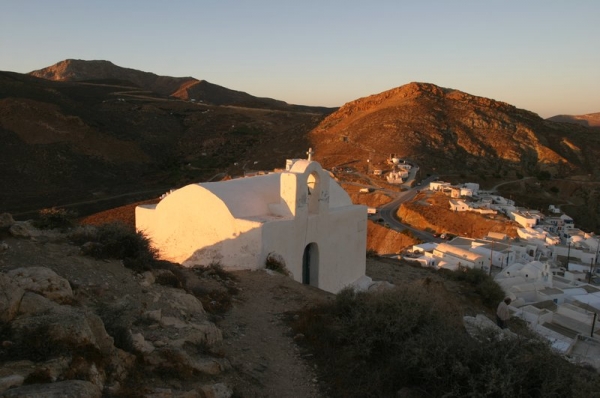 According to mythology, the island was given the name Anafi because Apollo made it appear to the Argonauts as a shelter from a bad storm, using his bow to shed light upon it (i.e. the island name Ἀνάφη is derived from ἀνέφηνεν, "he made appear"). If the name of the island derives from this word, and means "revelation", then Anafi is linked to Delos, an island whose name also derives from an ancient Greek word meaning "to reveal". Others say that the name is due to the non-existence of snakes on the island: "an Ophis" ("without snakes"). Despite its small size, Anafi offers archaeological as well as mythological interest. At the monastery of Panagia Kalamiotisa there are ruins of a temple built as an offering to the god Apollo Aegletus. Some of the inscriptions from the island (Inscriptiones Graecae XII, 248 line 8) refer to the god Apollo as "asgelatos" ασγελατος, a unique usage, said by some scholars to be a variant of Aigletes, radiant. However, one scholar (Burkert 1992) links this epithet to a Sumerian goddess of healing and to Apollo's son Asclepius. Ruins can also be found at Kasteli, and most of the findings, such as the statues, are now located at the "Archaeological Museum" at the Chora, in an extremely small room. In Roman times the island was used as a place of exile.

After the Fourth Crusade in 1204, when the Cyclades were taken over by Venetians, Anafi was granted by Marco I Sanudo to Leonardo Foscolo. In the late 1270s, the island was recovered for the Byzantine Empire by Licario and another Italian renegade and native of Anafi, John de lo Cavo, who succeeded Licario as imperial admiral in the Aegean. In 1307 the island was captured by Januli Gozzadini, of Bolognese origin, who established himself as its independent lord. Much later the ruler of Anafi, William Crispo (1390-1463), became regent of the Duchy of the Archipelago, leaving Anafi under the control of his daughter Florence. William is said to have built the fortifications (kastro) above the present village. He is also claimed to have built a fortress, sometimes referred to as "Gibitroli", on Mount Kalamos.

In 1481, the island passed to the Pisani family as part of a dowry. The Pisani ruled it until 1537, when the Ottoman admiral Hayreddin Barbarossa raided it and carried off all its inhabitants as slaves.[8] The island was eventually resettled, and acquired a set of privileges from the Ottoman court in 1700 in exchange for 500 crowns. Thereafter it was left largely to fend for itself, except for the annual visit of the Ottoman fleet to collect tribute. The island was visited in 1700 by Joseph Pitton de Tournefort, botanist to the French court. He describes Mount Kalamos as "une des plus effroyables roches qui soit au monde". Some of the ancient remains from the island were acquired by French and British antiquaries; one Hellenistic statue from Kastelli (of a woman holding an incense cup) can be found in the Hermitage Museum, St Petersburg.

During the Russo-Turkish War of 1768–1774, it was held and used as a base by the Russian fleet under Alexey Orlov from 1770 until the war's end.[8] During the Greek War of Independence the Anafiots sent "two caiques of men" to join the struggle. Many men left the island to help in the building of Athens as capital city of Greece, and from then on there was both seasonal and permanent migration, and a migrant community grew up in the city. They built houses for themselves on the slopes of the Acropolis rock, in an area still known as Anafiotika (see Caftanzoglou 2000). James Theodore Bent visited the island with his wife in the winter of 1880-81 and gives a vivid description of the island.

The island was used as a place of internal exile for criminals and political dissidents from the 1920s onward. Tourism developed in the 1970s, particularly after an electricity generator was built in 1974, and harbour works were undertaken. The building of paved roads from the late 1980s onwards not only increased tourism but revived the island's agricultural economy. There are numerous publications relating to the island from the mid-1960s and her photographs of the island and migrant communities over the decades since 1966 have been deposited in the Benaki Museum Photographic Archive (located in Kolonaki Square - Filikis Etaireias 15).