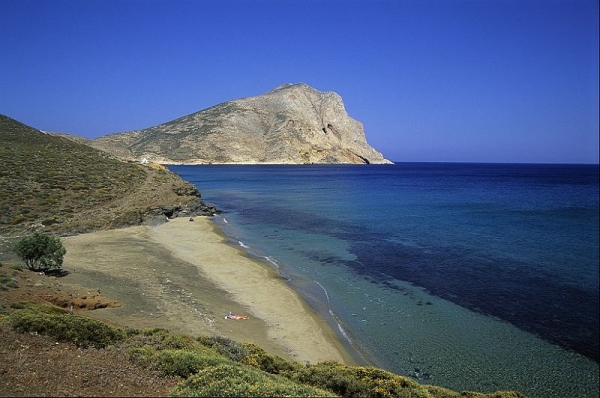 Starting at the port for a tour along the southern coastline...

Anafi's beaches constitute a comparative advantage for the island, in view of its unsullied, exotic character, which attracts visitors who enjoy remote landscapes. At the same time, the rocky coastline is particularly interesting to many categories of visitors.

Starting at the port for a tour along the southern coastline, Kleisidi, a small oasis, offers a splendid sandy beach, accommodation in the form of rooms to let, and local delicacies from its picturesque fish taverns. The next stops, Katsouni, Flamourou and Mikros Roukounas, are remote little coves with fine golden sand and transparent waters.

Megalos Roukounas is the island's most popular sandy beach, and a major meeting point for summer nature-lovers. It is quite long (around 400 metres) and is the outlet of a gorge that forms a small plain with olive trees and prickly pears. There is a tavern and rooms to let in the area.

The next small beach is Katalymatsa, known from the remains of the ancient port, which can be seen scattered throughout the area.

Megas Potamos is a pebbly beach, formed by the eponymous gorge that forms a deep valley between Kastelli hill and the mountainous range of Chalepa.

Further on, Aghioi Anargyroi is a small beach surrounded by steep cliffs and framed by the eponymous country chapel.

The circular tour of the island’s smooth coastline ends at the small bay of Prassies, former seaport of the Monastery and disembarkation point for pilgrims; the bay is enclosed by the majestic volume of Kalamos.

The circumnavigation of the Kalamos peninsula, is a unique experience for travelers, as the limestone cliffs rise imposingly above the boat, to an altitude of more than 350-400 metres. This site is a special challenge for mountaineers and climbers, as it is a unique venue for both mountain and sea sports.

Continuing the coastal tour to the northwest, visitors will encounter the lonely presence of the tiny Byzantine monastery of Agios Antonios, above a cliff and very close to the sea. This is followed by the coves of Agios Georgios with the eponymous chapel, and Symiakos, at the island’s northernmost edge.

The end of the tour to the west and south brings travelers to the pebbly remote beaches of Kalaggathi (no road access), Prassa, Vagia and Kyparissi.