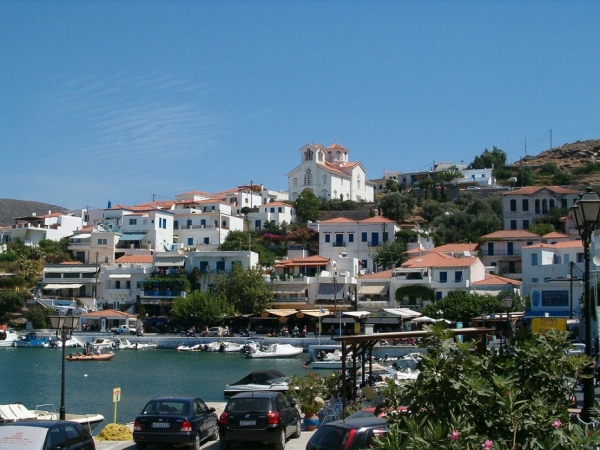 Andros (Greek: Άνδρος) is the northernmost island of the Greek Cyclades archipelago, approximately 10 km (6 mi) south east of Euboea, and about 3 km (2 mi) north of Tinos. It is nearly 40 km (25 mi) long, and its greatest breadth is 16 km (10 mi). Its surface is for the most part mountainous, with many fruitful and well-watered valleys. The area is 380 km2 (147 sq mi). The largest towns are Andros (town), Gavrio, Batsi, and Ormos Korthiou.

The island is famous for its Sariza spring at Apoikia where the water comes out of a lionhead. Palaeopolis, the ancient capital, was built into a steep hillside, and the breakwater of its harbor can still be seen underwater.

During the Final Neolithic (over 5,000 years ago), Andros had a fortified village on its west coast, which archaeologists have named Strofilias, after the plateau on which it was built. Strofilas was related to the "Attica-Kephala" culture, and predates the Cycladic culture of the Bronze Age. It was an important maritime center and one of the earliest examples of fortification in Greece. It is notable for rock carvings on its walls, which include animals such as jackals, goats, deer, fish and dolphins, as well as a depiction of a flotilla of ships. The island in ancient times contained an Ionian population, perhaps with an admixture of Thracian ancestry.[citation needed] Though originally dependent on Eretria, by the 7th century BC it had become sufficiently prosperous to send out several colonies, to Chalcidice (Acanthus, Stageira, Argilus, Sane). The ruins of Palaeopolis, the ancient capital, are on the west coast; the town possessed a famous temple, dedicated to Dionysus. In 480 BC, it supplied ships to Xerxes and was subsequently harried by the Greek fleet. Though enrolled in the Delian League it remained disaffected towards Athens, and in 477 had to be coerced by the establishment of a cleruchy on the island; nevertheless, in 411 Andros proclaimed its freedom, and in 408 withstood an Athenian attack. As a member of the second Delian League it was again controlled by a garrison and an archon. In the Hellenistic period, Andros was contended for as a frontier-post by the two naval powers of the Aegean Sea, Macedon and Ptolemaic Egypt. In 333, it received a Macedonian garrison from Antipater; in 308 it was freed by Ptolemy I of Egypt. In the Chremonidean War (266-263) it passed again to Macedon after a battle fought off its shores. In 200, it was captured by a combined Roman, Pergamene and Rhodian fleet, and remained a possession of the Kingdom of Pergamon until the dissolution of that kingdom in 133 BC.

During the long centuries of Byzantine rule, Andros was relatively obscure, but flourished due to its silk production.

Andros was captured by the Fourth Crusade on its way to Constantinople in 1203. After the fall of Constantinople in 1204, the island was slated to come under the control of the Republic of Venice according to the Partitio Romaniae; in 1207 it became part of the Duchy of the Archipelago under Marco I Sanudo, who in turn gave it to Marino Dandolo as a sub-fief. Probably sometime around 1239, Dandolo was expelled from the island by Geremia Ghisi, ruler of Skiathos, Skopelos, and Skyros. Dandolo died soon after and a case was brought before the Venetian courts against Ghisi by Dandolo's widow Felisa and his sister Maria Doro. Felisa was soon aided by the influential lord of Astypalaia, Jacopo Querini, who became her second husband. Although the Venetian court found in their favour in August 1243 and ordered the Ghisi brothers to give up Andros, this did not materialize. The case dragged on until after Geremia's death, when Duke Angelo Sanudo took over the island. He eventually gave half of it, according to the feudal law current in Latin Greece, to Felisa. The case took on new life after Felisa died and no claimant made appearance. Duke Marco II Sanudo then reverted the entire island to the ducal domain, but just two days before the legal deadline of two years and two days had passed, Marino's grandson Nicholas Querini appeared in Naxos to claim his inheritance. The case was brought before the courts of Venice, but Marco II disputed the Republic's authority over his domain. The case was eventually settled through the mediation of Niccolò Giustinian, the Venetian bailo of Negroponte in 1291–93, whereby Querini renounced his claims in exchange for a cash payment of 5,000 pounds. Thus Andros remained in the hands of the Sanudi dukes, who henceforth styled themselves "Lords of the duchy of Naxos and Andros" and occasionally chose the castle of Andros as their residence.[12] In 1292, Andros, along with other of the Cyclades, was raided by the Aragonese fleet under Roger de Lluria.

In December 1371, the island was granted as a fief to Maria Sanudo, half-sister of the last Sanudo duke, Nicholas III dalle Carceri. In 1383, Nicholas III was murdered and Francesco I Crispo became the new duke, giving Andros with Syros to his daughter and her husband, Pietro Zeno, the son of the Venetian bailo of Negroponte. Zeno was a very able diplomat,[16] but even he found it difficult to manoeuvre among the various competing powers of the era. Unlike Syros, Paros, and other islands, which had been left destitute and almost depopulated by the Ottoman raids, Andros managed to escape relatively unscathed, but in return Zeno was forced to pay tribute and provide harbour and shelter for the Turkish ships. Nevertheless, in 1416, the island was raided and almost the entire population carried off by the Ottomans. At about the same time Albanians crossed from Euboea over into the island, settling in its northern part.

In 1431, when the Venetians ravaged the Genoese colony of Chios, the Genoese seized Andros and Naxos, both under Venetian protection, in retaliation, and only adroit diplomacy by the dukes of the Archipelago managed to prevent the islands' outright annexation by Genoa. In 1427, Pietro Zeno died, and was succeeded by his son Andrea, who was of poor health and only had a daughter. In 1437, Andrea too died, and the island was seized by Andrea's uncles, who aimed to wed Andrea's daughter to their son when she came of age, and thus legalize their control of Andros. Venice quickly reacted and took over the island, installing a governor there while her courts heard the cases of all the claimants. One of them was Maria Sanudo's son Crusino I Sommaripa, Lord of Paros and Triarch of Negroponte. Like his mother, he never abandoned his claims on the island, and eventually was vindicated by the Venetian courts. After compensating the Zeno family, he took possession of the island in 1440.

Andros suffered once again heavily from Turkish attacks during the Ottoman–Venetian War of 1463–1479. In 1468 four ships attacked the island, killing baron Giovanni Sommaripa and carrying off numerous prisoners and booty worth 15,000 ducats. Two years later the Ottomans raided the island again, carrying off so many of its population that the island was left with 2,000 inhabitants. Despite these disasters, the two Sommaripa possessions of Andros and Paros remained the most prosperous islands in the Cyclades in the period, and the Sommaripa rulers of Andros acted independently of their theoretical suzerain at Naxos, even claiming the title of duke for themselves. By the 1500s, however, the two Sommaripa branches of Andros and Paros were at war with each other, with many Andrians being carried off to Paros. In addition, the Andrians suffered from the cruelty of their own "duke", Francesco, to the point that they sent an embassy to Venice threatening to call in the Turks if nothing was done. The Venetians responded by removing Francesco to Venice in 1507, and installing a governor of their own for the next seven years.

In the event, Sommaripa rule was restored when Venice recognized Alberto Sommaripa as the rightful heir. The island was seized by the Ottoman admiral Hayreddin Barbarossa in 1537, but Crusino III Sommaripa managed to regain it through the intercession of the French ambassador, in exchange for an annual tribute of 35,000 akçes to the Ottoman governor at Negroponte.

When the Ottomans annexed Naxos in 1566, at the behest of the local Greeks, the Andrians too decided to rise up against their ruler, Gianfrancesco Sommaripa. Although the latter managed to escape with his life, Andros too now came under Ottoman control. For the next thirteen years, the entirety of the former Duchy of the Archipelago was granted to the Sultan's favourite, Joseph Nasi, who ruled the islands via representatives and was mostly concerned with using them as a source of wealth.[28] Upon Nasi's death, the Greeks of Andros and Naxos requested from the Sultan that the descendants of their old dynasties be restored as Turkish vassals, but in the end, the islands were directly annexed as a province; in 1580, however, the Cyclades were granted a charter of privileges that granted them considerable local autonomy, low taxes and religious freedom, a situation that remained throughout the period of Ottoman rule.

On May 10, 1821, Theophilos Kairis, one of the leading Greek intellectuals, declared the island's participation in the Greek War of Independence by raising the Greek flag at the Church of St George: at this time, a famous heartfelt speech, or "ritoras" (ρήτορας), inspired shipowners and merchants to contribute funds to build a Greek Navy to combat the Ottomans. At the end of the war, the island became part of the independent Kingdom of Greece.