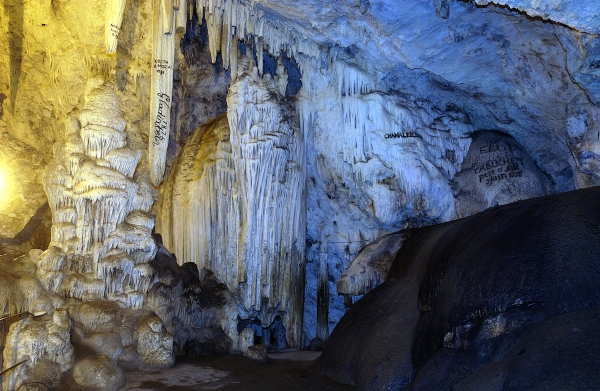 In the center of the island is the famous cave of Antiparos, one of the most beautiful and mysterious caves in the world. The cave has been used as a natural shelter from the Neolithic period onwards. The area was also used for pottery, and for the worship of the goddess Artemis, while at the entrance to the site is the plain but magnificent church of Agios Ioannis Spiliotis.

Signs and scratches on the stalactites and stalagmites attest to the passers, as the inscription on the altar of the generals of Alexander the Great and King Otto.

The cave of Antiparos

The cave is very extensive, and on several levels. The lyric poet Archilochus of Paros is said to have left an inscription in the cave. In 1673 the French archaeologist Marquis de Nointal, French ambassador in Istanbul lived in the cave for three days with numerous companions and celebrated mass on Christmas Day in the cave. Later visitors who carved their names included Byron and the first king of Greece, Otto. During the German occupation, part of the cave was destroyed. The cave is fully exploited in the second half of the 2000s with funds from the EU by erecting barriers, building adequate steps, installing lighting, security cameras and loudspeakers to inform visitors.

The Venetian Castle of Antiparos is a typical example of the fortified settlements established in the Cyclades the period of Latin in 13th-16th century. Its construction dates to the mid-15th century when the Venetian Giovanni Loredano decided to marry Mary Sommaripa of Antiparos.

The original version had a ‘motte’ (mound) at the centre and houses round the perimeter. The houses were built as one continuous block construction, the outer walls providing both the defensive wall of the fortified settlement. The only entrance was at the south wing. Inside the main settlement the houses developed as three-storey structures, each having a separate entrance which lead to external staircase. In the course of the settlement was extended outside the south wing to form a rectangular ring called "Xopyrga" and within the original enclosure around the base of the circular tower. In modern times, the original architectural style of the castle has altered, with the church of Christ being inserted as a religious element, while the central mound was used as a water tank tower. Today, the homes retain a satisfactory level of their original features, despite the collapse of the upper floors, and any intervention required permission from the archaeological department. Today most homes are developed in one with two floors and have a maximum ground-like trapdoor. Many now face outwards and have become shops facing onto the main street. An integral part of the castle of Antiparos are the small bats that come with dusk and iptantai around the tower to the east.