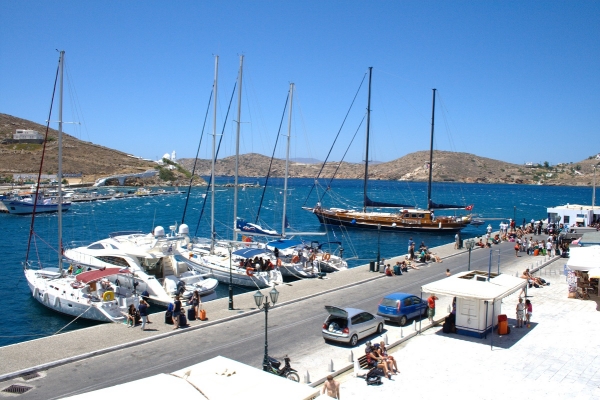 Ios is a Greek island in the Cyclades group in the Aegean Sea. Ios is a hilly island with cliffs down to the sea on most sides, situated halfway between Naxos and Santorini. It is about 18 kilometres (11 miles) long and 10 kilometres (6 miles) wide, with an area of about 109 square kilometres (42 sq mi). Population was 2,024 in 2011 (down from 3,500 in the 19th century). Ios is part of the Thira regional unit. Ios was the setting for the movie Ginger and Cinnamon (Dillo con parole mie). Also, scenes from the film Big Blue (Le Grand Bleu) were shot in Manganari.

The Port of Ios is at the head of the Ormos harbor in the northwest. From there the bus or a 15-minute walk up the steep donkey path takes you to the village, known as Chora. Chora is a white and very picturesque cycladic village, full of stairs and narrow paths that make it inaccessible for cars of any kind. Today, the main path through this village is completely taken over by tourism in terms of restaurants, boutiques, bars and discothèques. Apart from the port and the village of Chora, Ios has only a few small settlements, just a group of spread out houses in the background of major beaches (Theodoti, Kalamos, Maganari). Since the 1990s, the island mayor Pousseos has worked on Ios' development towards attracting different types of tourists. With the help of European Community funds some roads have been built, all of them paved, and a scenic amphitheater has been created by the German architect Peter Haupt (who died in 2003) at the top of the village hill. Unfortunately, cultural events rarely take place up there.

Excavations on Skarkos hill unearthed a prehistoric settlement, proving that Ios has been inhabited since the early Cycladic period. The architecture at Skarkos is preserved in places up to a height of almost three meters, with most of the buildings evidently having two storeys, stone-paved floors and a sewage system. Numerous well-preserved pottery, tools and utensils made of metal, stone and bone were also discovered.[3] Unfortunately, the Skarkos site remains largely unpublished. In 2008, Ios was among six European locations (out of 109 candidates) awarded the European Union Cultural Heritage prize for its exceptional conservation efforts at the archaeological site of Skarkos.

During later times, Ios made rather few marks in history. According to ancient tradition, Homer's mother was from Ios, and he himself was buried there - and indeed the locals will show visitors the site of the ancient town of Plakotos at the northernmost end of the island, where the rocky entrance to a tomb may be seen. There is no physical evidence connecting this with Homer however. There are signs of Mycenaean settlement. The north end of Ios has a ruined Venetian castle from the 15th century. The island is said to have 365 churches and chapels, like the days of the year.