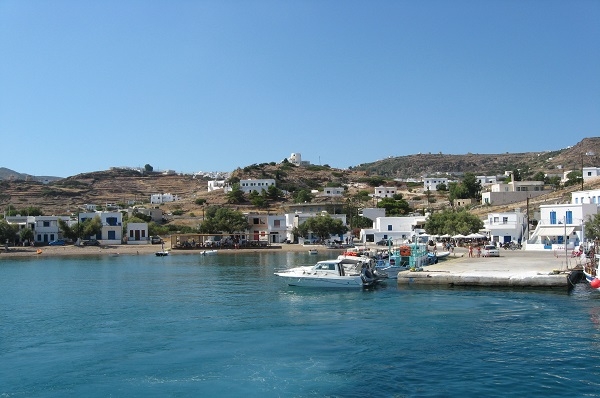 , Kimolos is a Greek island in the Aegean Sea. It lies on the southwest of the island group of Cyclades, near the bigger island of Milos. Kimolos is the administrative center of the municipality of Kimolos, which also includes the uninhabited islands of Polyaigos, Agios Efstathios and Agios Georgios. The island has a land area of 36 square kilometres (13.900 sq mi), while the municipality's land area is 53.251 square kilometres (20.560 sq mi), and it reported a population of 910 inhabitants in the 2011 census.

Kimolos is an island with rich history records. According to the tradition, it is named after Kimolos, the very first resident of the island. Echinousa is also a recorded name of the island during the ancient times, probably because of the snake Echidna (viper), being common even today on the island. Since the ancient era, it was a battlefield between Ancient Athens, the ruler of the island, and Sparta, the ruler of Milos. In the Middle Ages it was known as Argentiera (Greek: Αρτζεντιέρα), because of the silver-colored rocky lands of its southern coast. Since those times, these rocky lands was a trade good in the seas (Kimolia Gi-Kimolian Earth), making the island a major trade hub. Along with the rest of Greece, it was ruled by the Ottoman Empire, until 1829, when it was annexed by the Greek state along with the rest Cyclades.

Kimolos lies to the northwest of larger Milos island, separated from it by a 1 km wide channel. It is round-shaped, approximately 7 km in radius. The island has a total area of 36 square kilometres (14 sq mi). The highest point is mount Paleokastro, at 364 metres (1,194 feet) The only town is Chorio, located on a hill on the west of the island. There are also smaller settlements of Psathi (port), Goupa, Kara, Prasa, Aliki, Bonatsa and Dekas.

To the east of Kimolos lies the island of Polyaigos, half its size. Polyaigos is the largest uninhabited island of Aegean. It is also part of the municipality of Kimolos.