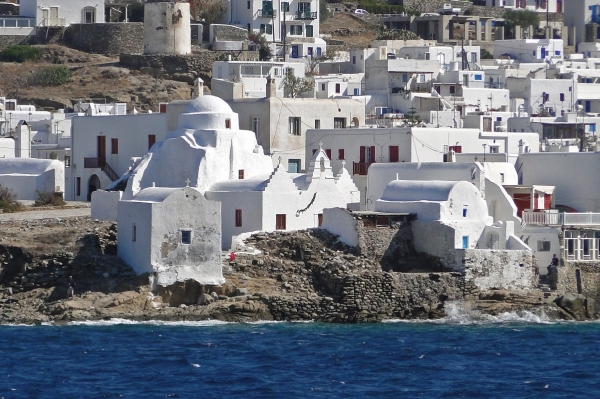 Attractions in Mykonos are plenty. Archaeological and not only sites are waiting for you to explore them. Mykonos hospitality and beauty are beyond comparison. Don’t forget to visit Mykonos Archaeological Museum –Folklore Museum –Aegean Maritime Museum or one of the many churches which are spread all around the island. View the unique architectural structure of Town Hall –Windmills and Three wells . In Little Venice the view is mesmerizing and the sunset is unforgettable.

ARCHAEOLOGICAL MUSEUM: The Archaeological Museum, located alongside the harbor, was built circa 1900, mainly to house finds from the excavation of the “Pit of Purification” (dating from the 5th century B.C.) and the necropolis of Rhenia. There is a large collection of vessels especially represented of Cycladic ceramics dating from the Geometric period until the 6th cent. B.C. Also on exhibit are wonderful black figure and red figure pottery and diverse finds, including Hellenistic period gravestones and other sculpture. Among the finds from Mykonos, especially impressive is the “Pithos of Mykonos”: a large jar, (made in a workshop on Tinos the 7th cent. B.C.) Richly decorated with bas – relief zones of bas-relief depicting various scenes from the Trojan War (the central composition shows Achaian warriors with the Trojan Horse).

MYKONOS FOLKLORE MUSEUM: The Folklore Museum is the located in an old, two-story, captain’s house in the Kastro of Mykonos town, a few meters distant from the proud Paraportiani church. There are six main exhibition halls which house collections of antique furniture, Byzantine icons, Folkloric ceramics, historical commemorative plates, decorative prints and gravures, as well as embroidered and hard-woven fabrics, locks and keys, weights and measures, a lovely collection of model boats, and other historical artifacts. There are also import archives of manuscripts and printed matter, photographs, maps and a significant library. Open from April to October 4:30 to 8:30 p.m. daily except Sundays. (tel.: +30 22890 – 22 591)

AGRICULTURAL MUSEUM - BONI WINDMILL AND LENA'S HOUSE are divisions of the Mykonos Folklore Museum: The first, located on the edge of the town at Apono Mili, is an outdoor museum, which presents the traditional Mykonian agricultural installation used for the production and processing of farm products: the threshing floor, the well, the oven, wine-press, etc. The museums centerpiece is the Boni Windmill, which is in full working order and may be visited from June to September daily, 4:00-8:00 p.m. (tel.: +30 22890 – 26 246) The second, near the Three Wells, is a charmingly preserved, authentic 19th century Mykonian middle-class dwelling, which is completely furnished and equipped with antique furniture and house utensils. Open evenings, except Sundays, from April to October, 6:30p.m. to 9:30p.m. (tel.: +30 22890 – 22 390)

AEGEAN MARITIME MUSEUM: Located by the Three Wells, next door to Lena’s House, this museum displays scale models of various rowing boats, sailing vessels and steam-powered ships which, in turn, from Prehistoric times until the present, have traversed the Aegean. Also there is a rich collection of maps and other engravings can be seen a collection of reproductions of ancient gravestones, carved with sea-themes; there, as well, is the tower with the mechanism of the Armenisti Lighthouse (1889). The “EVANGELISTRIA”, a traditional sailing vessel belonging to the museum, is moored every summer in the old harbor where it may be boarded by interested visitors. Open, April to October, daily, 10:30 a.m. to 1:00 p.m. and evenings from 6:30 to 9:00 p.m.. (tel.: +30 22890 – 22 700)