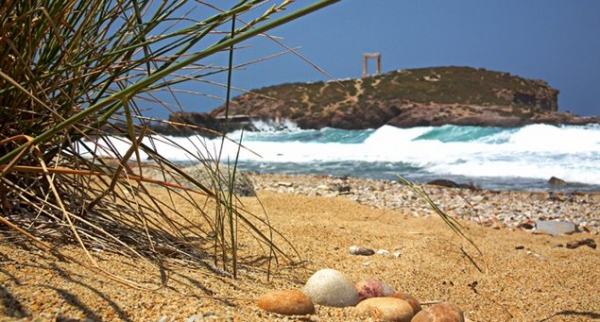 Many Cycladic islands are renowned for their beaches but Naxos is the only one that can boast an endless coastline comprising a string of beaches of incredible beauty, with superb turquoise waters and golden sands.

On Naxos there are beaches unspoiled or organized, hidden beaches to discover, beaches for water sports or family recreation; beaches next to ancient monuments, near important wetlands, medieval forts or Byzantine churches; beaches only a step away the from main town Chora, and beaches in areas of exceptional natural beauty, untouched by civilization or tourism.

Naxos has beaches befitting for a variety of tastes –this is what makes it one of the popular Aegean islands.

Abram: A quiet beach next to the small settlement of Kampos on the island’s northwest coast, Abram is ideal for swimming and water sports, particularly windsurfing during annual summer winds known as meltemia.

Agia Anna: Agia Anna beach, a continuation of Agios Prokopios beach, ranks as one of Naxos’s most renowned coastal spots.

Agiassos: Agiassos beach offers an enticing 750-meter stretch of fine sand and crystal-clear, shallow waters on the southwestern coast of Naxos. It is one of the island’s most unspoiled beaches

Agii Theodori: Pebble-covered and unspoilt, Agii Theodori beach is located on the island’s northern coast. The Byzantine church Agios Theodoros, from which the beach takes its name, is an attraction.

Agios Fykas: A small but gorgeous beach, Agios Fykas is located on the northeast coast of Naxos.

Agios Georgios: Credited with a “blue flag” beach-quality tag, and located just a short distance from the main town, Chora, Agios Georgios rates as the best choice of beach for those who do not wish to distance themselves from the capital.

Ai Giorgis Voridis: The well-sheltered, pretty little harbor of Ai Giorgis Voridis, named after the chapel of Agios Georgios, lies about 2.5km from Messi village, in the northeastern part of Naxos.

Ammitis: Ammitis, the nearest beach to the village of Eggares, on the island’s northwestern coast, is a long stretch of white sand, with crystal-clear waters, and offers wonderful sunsets.

Apollonas: Apollonas, a lovely beach accompanying the settlement of the same name, is located on Naxos’s northeastern coast.

Glyfada: Glyfada is an enormous sandy beach on the southwestern coast of Naxos. The landscape here features sand dunes and shady juniper trees at many points.

Grotta: Grotta acquired its name from the Italian word grotta, meaning cave. This beach is located at the main town Chora’s northern seaside.

Kalantos: Well-protected from windy conditions and located at the edge of the bay with the same name, this alluring sandy beach at Naxos’s southernmost point has crystal-clear, shallow waters.

Kampos: Well protected from windy weather, Kampos, located on the island’s northwestern coast, is ideal for swimming and fishing.

Kastraki: Kastraki is a small cove located behind the Mikri Vigla peninsula and next to Glyfada beach.

Klidos: Klidos is a complex of sandy beaches with crystal-clear waters. It is located next to the settlement of the same name, on the island’s southeastern coast.

Ligaridia: Ligaridia, a small pebble-covered beach with deep waters, lies next to the settlement of the same name, on the island’s eastern coast.

Lionas: This is the attractive beach at the picturesque Lionas settlement and cove, on the island’s northeastern coast.

Melinos: A small bay with a sandy beach, Melinos is located on the island’s northern coast.

Orkos: Comprising a series of small inlets between Plaka and Mikri Vigla, Orkos is located on Naxos’s southwestern side.

Panermos: Sheltered by the gulf at the island’s southeastern coast, Panermos harbor is almost always windless.

Plaka: A favorite of the hippies in the 1960’s and 1970’s, Plaka beach remains one of the most attractive and popular on Naxos.

Psili Ammos: A spellbinding beach on the island’s southeastern coast, Psili Ammos is spread before a juniper tree forest and offers a view of neighboring Koufonissi.

Pyrgaki: An enormous sandy beach with a strong sense of wide open space, Pyrgaki is located on the southwestern coast of the island, with views of the nearby island of Iraklia and of Ios further beyond.

Spedo: Located on the island’s southern coast, Spedo is a an unspoiled beach with immaculately clean waters in an area graced by rare natural beauty.

Vintzi: Vintzi, the smaller of two beaches at main town Chora, lies to its northern side, below Portara.