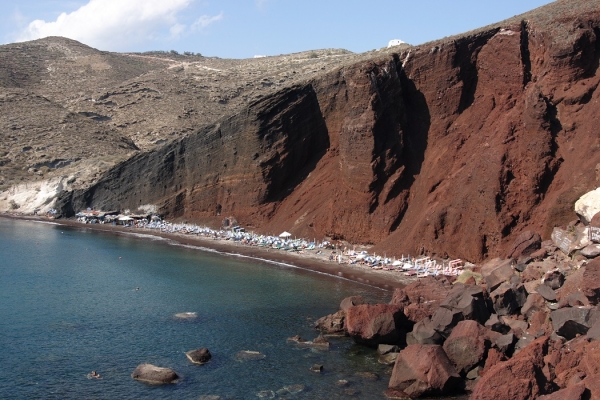 The island is the result of repeated sequences of shield volcano construction followed by caldera collapse. The inner coast around the caldera is a sheer precipice of more than 300 m drop at its highest, and exhibits the various layers of solidified lava on top of each other, and the main towns perched on the crest. The ground then slopes outwards and downwards towards the outer perimeter, and the outer beaches are smooth and shallow. Beach sand colour depends on which geologic layer is exposed; there are beaches with sand or pebbles made of solidified lava of various colours: such as the Red Beach, the Black Beach and the White Beach. The water at the darker coloured beaches is significantly warmer because the lava acts as a heat absorber.

AVIS: South of Monolithos, you will find the black pebbled beach of AVIS, or Exo Gonia: a popular destination for windsurfers and other sea sports enthusiasts, because it is windy. It took its name after the tomato processing plant operating there under the name AVIS.

Akrotiri: A small beach near the Akrotiri excavation. There are a lot of fish taverns and a small hotel with a café.

Almyra: This rather secluded beach resembles an outdoor sculpture museum. It is fairly undiscovered, since access is through a small road starting just before the village of Akrotiri. There is also a fish tavern near the water. The word Almyra in Greek means salty (implying sea salt).

Aspri (White) beach: Huge white rocks, pumice stone, black sand and white pebbles, crystalline waters: this small beach makes a sharp contrast to the nearby beach of Kokkini (Red) beach. There are a few umbrellas and sun beds, along with a canteen. You can get there following the path from the neighboring beach of Kambia, or by boat from Akrotiri beach and Kokkini (Red) beach.

Vlychada: The impressive chimneys you will notice as you enter the fishermen's village, belong to Nomikos tomato-processing plant. This small factory, along with others, such as knitting factories and wineries, operated on the island during the late 19th and the early 20th century. The white volcanic rocks of Vlyhada have amazing shapes and they are really impressive. They have been created in the course of centuries by rain and wind. The beach has dark thin sand and small pebbles, a few sun beds, umbrellas, a canteen, a beach bar. It's really long, so there is room for everyone and it rarely looks crowded. Bare in mind that during the summer it can get quite windy, so ask the locals before you go. Above the small port there are a few taverns.

Vourvoulos: A quiet beach with black pebbles, few umbrellas, salt cedars and "syrmata" where fishermen used to house their boats: They are small rock hewn, seaside structures with colored doors, common in other Cycladic islands like Milos. You will also find a small port and a tavern.

Thermi or Hristos (Christ): Black pebbles and pumice, red volcanic rocks and geothermal springs at the ruined baths that used to offer a natural SPA! If you come across this beach as you sail around the Caldera, you will be impressed by the small church of Hristos ta Thermi (Christ at Thermi), which is built inside the volcanic rocks, next to the ruined rock-hewn houses. To get there on foot, follow the cobbled road and then the path starting below the "Ta Thermi" pizzeria, near Megalohori village.

Kamari: It is one of the most famous and cosmopolitan beaches of the Cyclades and is always filled with foreign visitors. It has dark colored sand and crystal clear waters. There are umbrellas and sun beds along the beach. Above it raises the imposing Mesa Vouno (Mountain) where ancient Thera is built. The wide coastal footpath which is closed for vehicles all through the summer, is full of cafes, restaurants and shops. In the settlement there are also many hotels and rooms to let. In the inner streets you will find many more shops, super markets, car rentals, travel agencies etc.

Kambia: A small pebbly beach with crystall clear waters, umbrellas and sun beds. It is among the beaches called Aspri (White) and Kokkini (Red).

Kokkini (Red) beach: This impressive beach is a real attraction of the island! The view of the red, almost vertical, volcanic rocks and the small, reddish pebbles will take your breath away. This volcanic scenery is dotted with umbrellas and the figures of visitors with colorful clothes and accessories, coming here to marvel at the wild landscape, take a swim, or rent a canoe or sea bicycle and enjoy the view from the water. It will not be necessary to bring any supplies with you, since there are small canteens. You may come on foot (10 minutes walk), or you can choose the boats leaving from Akrotiri beach, Kamari, Perissa.

Culumbus: This beach has small black and red pebbles. Also, a huge, impressive rock offering its shadow during the hottest hours of the day. It was -and still is- popular with nudists. It is usually fairly quiet and there are no sun beds or umbrellas. Therefore, you should bring with you any supplies you might need. At a short distance east there is the underwater crater of Culumbus which last erupted in 1650. Those who dare, may go for an exploration of the deep: the crater is 500 metres from the surface, but its SW end is just 10 metres down.

Mesa Pigadia Small white pebbles and wonderful pumice rocks: This beach, that looks like Vlyhada, used to be very popular with bikers and other visitors searching for alternative destinations. It is fairly organized, with umbrellas, sun loungers, taverns. The colored doors of the syrmata, the small rock hewn structures for fishermen's boats built into the volcanic rock, make Mesa Pigadia even more picturesque. Through a cave you can go to Aspri beach.
You may access Mesa Pigadia by boat.

Monolithos: An organized beach with shallow waters and black sand. It is a popular destination for families; there is a playground with wooden fixtures, beach volley, basketball and football courts. There are taverns, hotels, cafés, mini markets, etc. You will notice the monolith that gave its name to the beach, as soon as you land on the island by plane, or driving around the airport.

Baxedes-Paradisos: An extended beach close to Oia (Paradeisos=Paradise). Due to the shallow waters it is preferred also by families. It has dark sand and volcanic rocks. Driving on the main road along the coast, you can pick out any spot you like to make your stop. Many people take their morning or afternoon walk by this road, to enjoy the beautiful view. In the area there are taverns and small hotels.

Karterados beach (Exo Gialos): The landscape here is impressive. A dirt road runs along the beach of Exo Gialos, with tiny black pebbles, dark blue waters, looming rocks from the wind and the rain. Also, salt cedars casting their much-coveted shadow. To get to Exo Gialos you will have to drive through the village of Karterados and all the way down to the coastline. From Exo Gialos you can drive towards Monolithos beach.

Perivolos: Perivolos followed in growth Perissa, which was centuries ago a holiday and swimming destination for the locals.
Today, it is a popular and busy beach, also preferred by youngsters. It is essentially a single large beach together with its neighboring Perissa. It is extensive, with black colored sand, crystal clear waters and a series of beach bars and restaurants which offer umbrellas sun lounges and other facilities. There are also water sports, beach volley, taverns and ouzeries (special small taverns serving ouzo together with snacks), cafes, bars and hotels. An interesting feature of this beach is the impressive old tomato-processing plant. In the south part of Perivolos, you will find the quiet beach of Aghios Georgios.

Perissa: It is next to Perivolos, situated in the shadow of the imposing Mesa Vouno, which separates it from Kamari. Perissa used to be a holiday destination for the residents of the island and had fish taverns from the old days. It grew after the 1956 earthquakes when it started being densely populated. On the beach, which has fine black sand, you will find sun beds and umbrellas. There are beach bars, taverns, a water park, a diving center, hotels, rooms to let etc. Dominating the area is the temple of Timios Stavros (Honest Cross), the largest church in Thera, with 5 domes and an ornate steeple reconstructed with initiative from the Panthiraiki Union, after being destructed by the 1956 earthquakes. For those of you who love to walk, there is the path to Mesa Vouno. You will reach the chapel called Chamilos Profitis (Prophet) Elias and from there you will witness a view that will take your breath away! Another walk is towards Panagia Katefiani, the church built within the rock between Perissa and Mesa Vouno.

Plaka: Near Megalohori, similar to Thermi –and equally isolated. To get there, you have to go downhill quite a long way on an impressive path for about 20΄. You will pass by the church of Panagia tis Plakas (Virgin Mary of Plaka) and the old baths, which stand just a few metres above sea level.

Pori: At the east side of the island, near Culumbos beach, you will discover Pori beach. It is accessible by the main asphalt road running through the north-eastern side of Santorini. Locals and their families often go to this beach. There is also a fish tavern.

Kantharos: This beach is near Ammoudi. You should park your vehicle and then walk to the beach which has grey sand and small pebbles. It is divided in half by some big rocks. The scenery looks even more interesting from the water. While swimming, you can enjoy the compositions of black and white volcanic material on the huge rocks. Among them, the building of an old pesthouse stands out like a... ghost from the past.