Santorini: History of the Volcano 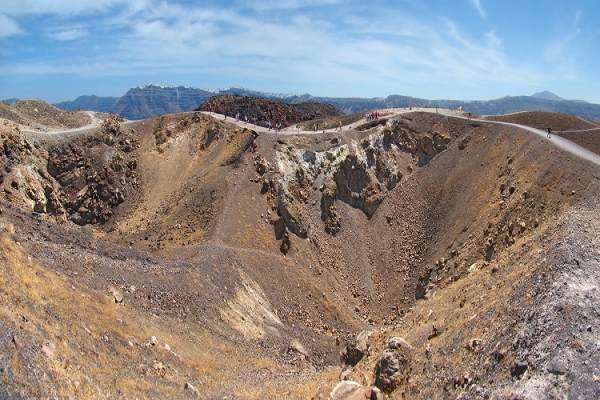 Santorini is one of the few Greek destinations which attracted scholarly interest from very early on. The history of our planet, spanning hundreds of thousands of years, has left its indelible markings on its Caldera. And this unique geological book remains constantly open and readily accessible to anyone who wishes to study this aspect of history. On the other hand, the active volcano of Santorini, with its intermittent large or small eruptions, is a permanent attraction to both geologists as well as volcanologists.
It is not accidental, therefore, that there is a long-standing history of scientific research on the island and that scholarly interest has been preserved unabated to this day, its results never ceasing to constantly surprise us down to the present. Because the discovery in Santorini of one of the greatest geological events to have ever been witnessed by mankind over the past 10,000 years, namely the eruption of its volcano near the middle of the 2nd millennium B.C., is not a discovery to be passed over lightly...
This is an extract from the preface of Chr. G. Doumas, Professor Emeritusof Archaeology, Athens University, in Antonis N. Kontaratos's book entitled "Thera: A march through time" (Heliotopos Publications).

According to Professor Antonis Kontaratos: "...behind the present serenity of the Cyclades lies a turbulent past. They have been repeatedly ravaged by man and destroyed by nature. Drought, war, pirate raids, earthquakes and volcanic eruptions are some of the calamities these islands have suffered during their several thousand year old history, driving the inhabitants to desert their blissful homes. Santorini is, without a doubt, the most exotic, the most spectacular, the most sensational, the most beautiful and the most tragic of the Aegean isles.
At the first crack of dawn the island resembles a menacing fortress with its sheer 300 meter cliffs hiding behind dark shadows amidst a sea which, according to Homer, resembles a deep red wine...Since the beginning of time Santorini has been tormented by geological upheavals: blasted from the sea, savagely torn apart and blown up again...".
The island of Thera, although non-volcanic, did not always possess its present size. Prior to volcanic activity in the region, two large massifs still prominent today, of crystalline rocks such as schist, clay slate, limestone and marble, were all that the original island consisted of.
The first massif lay in the south-central and southeastern part of Thera, Mesa Vouno, extending northwest to Athinios by way of the prominent hills on which the monastery of the Prophet Elias and the village of Pyrgos now reside. The second massif, an extension of the first, runs from the northwest and terminates at Gavrilos. The most elevated region, by far, is the rocky mass of Prophet Elias at 565 meters. Next in size is Mesa Vouno at 369 meters. Mesa Vouno projects southeastward between the coastal plains of Kamari and Perissa to form a bold headland extending into the sea. Gavrilos (elevation 161 meters) also projects seaward towards Vlychada.
After the commencement of volcanic activity many hundreds of thousands of years ago, these extensive remnants were enlarged from time to time mainly towards the north, northwest and west by the spread of lava from various vents. By the first half of the second millennium B.C. the island had taken a round shape, part of the outline of which roughly corresponded to the present outer coastline of the Santorini isles –Thera, Therassia and Aspronisi.
To the northwest is the second largest island of the group, Therassia, which is about 6 kilometers long from north to south and 2 kilometers wide from east to west. It is wholly volcanic, composed of alternating sheets of lava and layers of tuff.
West of Thera and south of Therassia is the small, uninhabited island of Aspronisi (meaning white island). The name derives from the conspicuous and thick uppermost layer of white pumice adorning it which, from afar, resembles steep cliffs covered in snow.
Thera, Therassia and Aspronisi, the surviving land fragments of what was once a whole island, almost completely enclose an oval lagoon measuring about 11 kilometers from north to south and 7 kilometers from east to west. There are only three entrances to this lagoon. One opening is between Thera and Therassia in the northwest region. A second lies between Therassia and Aspronisi to the west and a third between Aspronisi and Thera in the southwest. The greatest depths of this lagoon are in the northern half, plunging more than 410 meters. However, considerable variations in its depth have been recorded at different times and at different places.
The sides of the island facing the lagoon form precipitous cliffs plunging almost vertically into the sea. These cliffs are generally as steep below the water as they are above. They reach a maximum height of 330 meters at Imerovigli. This stunning manifestation of nature, beautiful as it is, is the result of a brutal attack on the island, exposing its innards for all to see. Bare rock has been revealed and is under scrutiny for science to unearth the geological birth and history of this volcanic island long before it could ever be recorded by man.
The Caldera spans all three islands in a striking display of nature at its best. A spectrum of white, red and black shades are dispersed in panoramic dimensions only to reunite creating a dramatic, yet astonishing sight. Here and there on the rim of the Caldera, snowy white villages appear suspended precariously in mid-air. Spiraling paths descend from atop the cliffs to the water's edge. Nowhere else on earth can one observe such perilous manmade dwellings among the harmony and almost magical array of nature's hues.
It is no wonder that Santorini is formally considered the most beautiful island in the world.

*Volcanic craters and hot springs are present on both islands. Dormant craters and active vents can be visited on Nea Kameni. Both volcanic islands are under scrutiny by satellite as well as underground systems. Even the minutest alteration is recorded in order to forecast any hint of reactivation.

Research data shows that the so-called "Minoan eruption" was one of the largest volcanic eruptions in history, second only to that of Mount Tambora, Indonesia, in 1825.
According to Fouquet, the violent eruption and its catastrophic consequences date back in 2000 BC. According to Dörpfeld, it was in 1500 BC. Others place it between 1890 and 1500 BC.
Τhe Greek professor Spyros Marinatos, who supported Dörpfeld, In 1939, formulated the groundbreaking theory for its time, namely that the Minoan civilization was not ravaged by invaders around the mid-2nd millennium B.C., but by the violent Theran eruption taking place during the same period. More specifically, he argued that it was destroyed by a large tidal wave caused by the collapse of the central volcanic cone and which, he argued, had struck Crete. Marinatos based his theory on two archaeological findings. The first of these corroborated that the demise of the Minoan civilization was not the result of human agency (external incursions or internal riots) and the second was an indication that the tidal wave had left its mark on Amnisos, the port town serving Knossos at that time. At Amnisos, Marinatos located certain buildings, the walls of which had collapsed and had been carried off towards the coast by the tidal wave. He also found traces of Theran pumice that had been trapped inside the ruins, which he attributed to the tidal wave.
However, this theory was overturned by the last carbon dating of an olive branch found buried in volcanic ash. This dating placed the eruption between 1627 and 1600 BC, possibly in the years 1613-1614.

*According to professor Antonis Kontaratos, Marinatos's theory, as well as furnishing useful insights, also poses certain problems, as it was subsequently proven. The insights it offers relate to the fact that a tidal wave of a certain size must have formed, that it must have reached Crete and caused a degree of material damages (at least according to the Amnisos findings), and that it must have deposited salts on the cultivated fields, thus ruining the crops to a certain extent. At the same time, volcanic ash containing sulphur must have covered arable land with a layer of a certain thickness, thus once again dealing a blow to the harvest. On the other hand, it has three drawbacks: Firstly, there are no clear indications of the destructive passage of a tidal wave in Crete apart from Amnisos. Secondly, the Minoan civilization was not destroyed by the Theran eruption but nearly a century and a half later, according to the latest archaeological findings. Thirdly, various towns of the time situated in the Aegean survived the eruption and continued to exist.
*In 1967, Marinatos commenced extensive research, in the same Akrotiri area which had already been excavated by the two preceding foreign archaeological missions almost a century earlier.

The famous reference to ancient Atlantis, which sank about 9,500 years ago, in Plato's works Timaeus and Critias has initiated a global search and led to the formulation of numerous theories concerning the geographic location of the mythical empire.
More than 200 sites throughout the planet claim to be the lost Atlantis. Among them Atlas Mountains in the Sahara Desert, the Sous-Massa-Draa region in southern Morocco, the Meroe region in northern Sudan, the Indus River Valley, Antarctica, the island of Lesvos (off Plomari), Sherbro Island off Sierra Leone and others.

Santorini, however, is considered by many the most likely site of Atlantis, due to the volcanic eruption that caused a large part of the original island to sink.
According to Antonis Kontaratos, in 1966, a research team under Professor A. Galanopoulos and American oceanographer-engineer J. Mavor visited Santorini in order to collect data in support of the former's theory, which equates Atlantis with Santorini. The oceanographic vessel Chain was used, belonging to the Woods Hole Oceanographic Institution, which recorded two morphological craters on the seabed inside the Theran Caldera and ascertained the absence of tectonic ash in the linear expanse between the islands Thera-Nea Kameni-Therassia. Along the coastline and in the hinterland, the research was confined to geological observations and topographic surveys. Their findings were published in international journals adapted to a lay audience and received wide popular acclaim. Basically, they correlated Atlantis with Santorini, based on geological and mythological data, as well as historical sources (Egyptian scrolls, Old Testament).
In 2003, the Hellenic Centre for Marine Research (HCMR), using private funds, conducted research in the area west of Santorini looking for any remains of ancient Atlantis. Results have shown that, even if there is some historical truth in the association, evidence is very hard to find on the seabed, due to the thickness of volcanic deposits.
Research covered an area of 25 sq. km. Sonar exploration revealed certain geometrical features in linear arrangement, at an average water depth of 115 meters and a level area of 4.5 sq. km. And one more clue: there is no reference of Atlantis in the works of Homer, Hesiod, Herodotus, Thucydides, and Aristotle; only Plato mentions it.

*The myth of the ideal city called Atlantis has had a strong influence on the work of thinkers, such as Francis Bacon (The New Atlantis) and Thomas More (Utopia).
*ItaIian researcher Luana Monte, identifies Atlantis with the Minoan civilization, suggesting that Plato actually tells the story of the war between Athens and Crete in the Bronze Age.