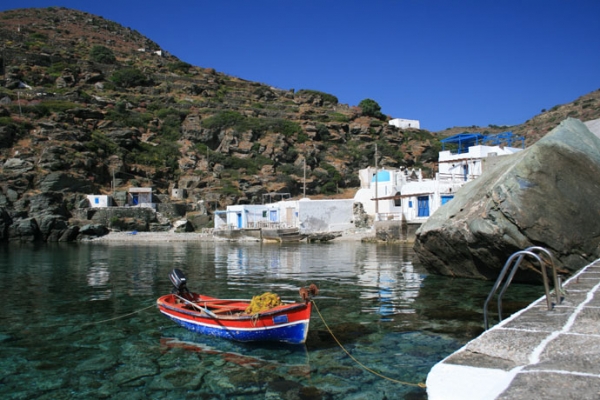 The coastline and the partition of the coasts of Sifnos form beaches for all tastes. In many areas of the island, there are isolated sandy beaches and organized beaches. In Sifnos there are also rocky coasts, pebble beaches and golden sandy beaches, some of which are accessible by picturesque paths and others by the sea.

A few words on the most popular beaches...

Kamares: The village of Kamares is situated 6, 5 km. from Apollonia and it is the port of Sifnos and the biggest coastal village of the island.

At the opposite side of Kamares there is the area of Agia Marina (that the Sifnians call "Pera Panta") that took its name from the homonymous church (Saint Marina), which is situated on the hill slope. In Agia Marina you will also find rooms to let, hotels and a grocery, restaurants, cafes-snack bars etc.

Between the two areas there is the beach of Kamares, one of the most beautiful sandy beaches of the island, with virgin vegetation, reedy areas, a shore side lake and sand-dunes with sand lilies that bloom in August. Every year the beach is awarded with the European Union’s BLUE FLAG by the FEE, since it meets the criteria of the program (cleanness, organization, water quality, safety, lifeboats, first aid, services, installations etc.)

From Kamares starts a path that passes by the Sanctuary of the Nymphs, the Black Cave (Mavri Spilia), the installations of the old mines and leads to the church of the Virgin of Toso Nero (Panagia Toso Nero) or to Saint John the Theologian of Mongou (Theologos tou Mongou) in Apollonia.

Here, you will also find a port for fishing boats, with a spacious jetty, which is used during the summer for the organization of cultural events and the small theatre of Platis Gialos on the beach.

Every year the beach of Platis Gialos is awarded with the European Union’s BLUE FLAG by the FEE, since it meets the criteria of the program (cleanness, organization, water quality, safety, lifeboats, first aid, services, installations etc.)

Among the sights of the area is the White Tower (Aspros Pirgos) which is situated 1, 5 kilometer to the north-east of the beach and which is one of the best preserved of the 76 ancient beacon-towers of the island.

Another interesting place to visit is the church of Saint Sophia, which is situated on the right side of the asphalted road that leads to the entrance of Platis Gialos.

Vathi: Vathi is one of the most beautiful and the biggest beaches of the island and it is situated westwards, 14 kilometers from the capital of Sifnos, Apollonia.

On the beach you will find the beautiful church of the Taxiarchs (16th century) which is celebrated 3 times a year (in July, in September and in November).

Faros: Faros is a fishermen village with a leeward port, situated 7 km. from Apollonia. Faros was the port o Sifnos up to 1883 and it took its name after the lighthouse which was situated on the beach (where today starts the path leading from Faros to Glipho).

In Faros there are three small sandy beaches:

The central beach of Faros is located at the end of the asphalted road and it has a wonderful view of Chrissopigi. Here, you will find restaurants, taverns, a grocery, cafeterias - snack bars etc.

The beach of Glipho is accessible by a short path that begins on the right side of the beach of Faros. There are no buildings on the beach of Glipho. Here starts a beautiful, recently restored path (with night lights) that leads to the beach of Apokofto and to Chrissopigi. From those beaches one can see the ladder of the mines and the installations for the loading of minerals that were extracted from the mines of this area.

The beach of Fassolou is located on the left side of the beach of Faros and it is accessible by a path that starts from Faros, next to the bus station, or by the asphalted road. On this beach you will find a restaurant. In Fassolou you will also find the monastery of the Cross (in Greek: Stavros) of Faros.

There is also the rocky beach of Aspra Gremna, which is located on the way to the entrance of the carriageway that leads to Fassolou.

In the wider area of Faros there are many tourist lodgings (hotels, rooms to let, studios and apartments).

Chrissopigi: Ten kilometers from Apollonia and before Platis Gialos, you will find the most photographed spot of the island, Chrissopigi.

On the cape of Chrissopigi there is the homonymous monastery of the Virgin Mary of Chrissopigi (Panagia tis Chrissopigis) (1650), the patron saint of Sifnos. Its feast takes place the eve of the feast of the Ascension, in memory of her miracle, when people from all over the island and from other parts of Greece visit the church.

The rocks of Chrissopigi are the favorite place of many swimmers during the summer.

To the east of the church, there is the sandy beach of "Apokofto” with green-blue waters, unique buildings and two restaurants. To the west, you will find “Saoures”, a small isolated pebble beach.

Among the sights of the area is the White Tower (Aspros Pirgos), which is situated near the crossroads of the roads leading to Platis Gialos and to Chrissopigi and which is the most famous and the best preserved tower out of the 76 ancient beacon towers of the island.

In the wider area of Chrissopigi, there is a grocery, a hotel and a few rooms to let.

Cheronissos: Cheronissos is the northernmost beach of the island and it is situated 15 kilometers from Apollonia. It is a beautiful picturesque fishermen village, with a small sandy beach, decorated by the beautiful church of Saint Polycarp (Agios Polykarpos). Here, you will find taverns, a mini market, a few rooms to let and a traditional pottery. At the entrance of the bay there is the dominating monastery of Saint George of Cheronissos.

Most of its famous feasts that are celebrated at the churches of the wider area take place in the winter.

Varoulidia: Vroulidia is a small pebble beach, 14 kilometers from Apollonia and about one kilometer before Cheronissos.

On the beach there are two restaurants.