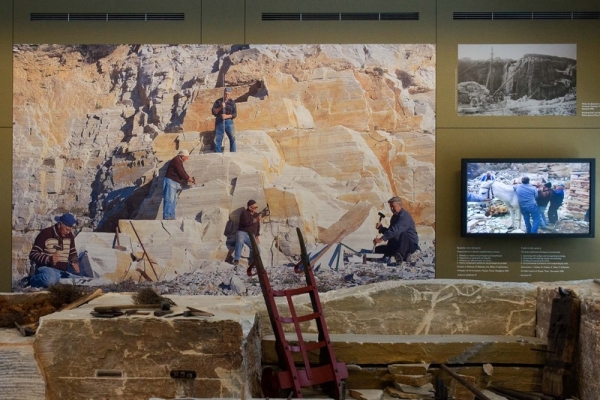 According to some, the island was named after Tinos, its first settler. Aristotle mentions that it was also called “Hydroessa” in the Antiquity, due to its many springs (“ydor” means water in ancient Greek), as well as “Ophiussa”, as there were many snakes (“ophis” in ancient Greek) on the island, too. The ancient proverbial phrase “Tinian sufferings”, used to describe the misfortunes that plagued the residents due to the “Tinian vipers” of Hesychius, probably originated from that fact.

According to an ancient tradition, Poseidon was worshipped as the “great healer” on the island, because he had sent a big number of storks to exterminate the snakes of Tinos. Based on that tradition, Brochardt tried to prove in 1681 that the word “Tinos” and its Doric form “Tanos” derive from the Phoenician word “Tenok” which means snake or dragon.

The ancient mythographer Apollodorus claims that Hercules killed Boreas’s sons, Zetes and Calais, on Tinos and placed two columns upon their tombs, one of which moved every time the north wind was blowing. This myth, which has several variations, is connected to the strong winds and especially the north winds that blew over the island making navigation difficult. According to the ancient Greeks, they originated from Thrace.

Traces of human existence since the Early Cycladic period (3rd millennium BC) have been discovered in Tinos. A Mycenaean vaulted tomb with grave goods that was found at Agia Thekla on the cape of Agios Ioannis dates back to the 13th century BC. Remnants of the ancient city’s walls during the Archaic, Classical and probably the Mycenaean period, too, have been discovered on the foothills of Exombourgo, at the centre of the island, while tombs of the Geometric period have been found in Kardiani.

Museum of Artists from Ysternia

A small museum that was created in the year 1987 in a building that was a school of arts and crafts where girls learned to knit and weave and even earlier, an elementary school. You will see works by artists who were born in the village, such as the Fytalis brothers and the Malakates brothers, Georgios Vitalis, Lazaros Sochos, Antonis Sochos, and others. For more information, please contact the Municipality of Tinos Τelephone number: +30 22833 60100

Museum of Marble Crafts of Pirgos

A contemporary museum that was created by the Cultural Foundation of the Piraeus Bank Group and was partially funded by the 3rd Community Support Framework and the Bank of Piraeus. In its spacious rooms, with the help of audiovisual material it displays the technology of marble, the equipment, and the techniques used in pre-industrial and proto-industrial Tinos. There are dozens of objects (from tools to designs by old marble sculptors) that were gathered with donations by private persons or entities. The exhibition extends to the outdoor areas. Moreover, periodic exhibitions are organized.

Museum of Artists from Pirgos, Tinos

At the start of the central cobblestone street of Pirgos (Giannouli Chalepa Street) you will find the small museum of artists from Tinos with works that provide a picture of the artistic production of the sculptors who were born in the area of Pirgos and Panormos. In the large room there are 47 plaster casts of marble works. Next to it there is the house where Chalepas was born, with his personal belongings and work. You can visit the two museums with the same ticket. Telephone number: +30 22830 31290 Please, also have a look at: www.youtube.com/watch?v=DEFRBa-hIDU

A Neo-classical building built in the year 1925 houses the Conference, Exhibition, and Research Centre of the Foundation. It was founded by the Holy Foundation of Evangelistria and was inaugurated in the year 2001. The permanent and periodic exhibitions it hosts every summer are very interesting. The permanent exhibition presents works by the well-known sculptor of Tinos Giannoulis Chalepas. The Foundation also has a library and a cafeteria. Τelephone number: +30 22830 29070, www.itip.gr

It is located on Megalocharis Avenue and includes exhibits from all over Tinos and especially from the two largest sanctuaries – the Thesmoforio, dedicated to the Goddess Demeter, from the 7th century B.C., which was built on the slope of Xombourgo, and the Hellenistic temple of Poseidon and Amphitrite, in Kionia. One item of interest is the marble sundial that dates back to the end of the 2nd century and the beginning of the 1st century B.C. It is a complicated construction that shows the solar calendar, the equinoxes, and the solstices. It is unique in the world, a work by of Andronikos of Kyristos. (Open from 08:30 a.m. to 3:00 p.m., except for Mondays) Telephone number: +30 22830 22670

The Museums of Evangelistria

Many museums operate in the front courtyard of the complex of Evangelistria.

- Museum of Artists from Tinos. It was established in the year 1930 and includes paintings and sculptures by artists from Tinos. You will see sculptures and paintings from the 19th and the first half of the 20th century by the Fytali brothers, Georgios Vitalis, Dimitris Filippotis, Lazaros Sochos, Ioannis Lampaditis, Ioannis Voulgaris, and others.

Exhibition of icons and treasures. Icons that were gathered by various churches and monasteries of Tinos are exhibited, as well as historical treasures of inestimable value. Here you will see the copy of the icon of the Virgin, the old replica of Christ's tomb, the ring of Kolokotronis and one of the three surviving maps designed by Rigas Ferraios (printed in the year 1797).

- Antonios Sochos Hall. With sculptures by the professor and academician of the Polytechnic School Antonios Sochos, which he donated himself to the Holy Foundation of Evangelistria in the year 1966.