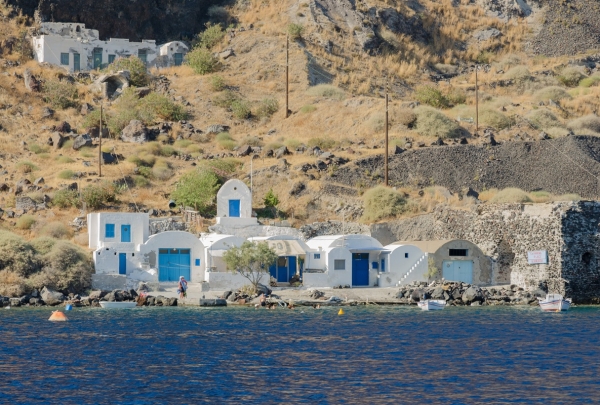 Potamos: It is built in a ravine and has several cave houses. the churches of Agios Dimitrios and Panagia Giatrissa (“The Healer”) as they call it are well worth visiting.

Kera: It is also called Keradiana and lies on the northeastern side of Manolas, high upon the hill with a great view over Nea Kameni. It is worth ascending the hill until the chapel of Prophet Elias (270 AD). Info The old port of Thirasia is Korfos with the great fish taverns, where the small boats stop as they travel from Athinio to the volcano.

Manolas: This is the capital of Thirasia, built on the edge of the caldera. It has narrow streets, a bakery, a mini market and it is known for the church of Agios Konstantinos (1874). Agrilia: It was the largest and oldest settlement on the island until 1928. It is worth wandering and discovering the cave houses and the “kanaves” (old wine cellars). The church of the Lady of the Presentation (Panagia ton Isodion or Lagadiou) is built at the entrance of the settlement (1887).

Riva: It is a small port of Thirasia, upon which the chapel of Santa Irene is built. According to a version, Santorini took its name after this small church. Here you will find fish taverns and a black sand pebbly beach. The local bus and the taxis will take you from Riva to other settlements.