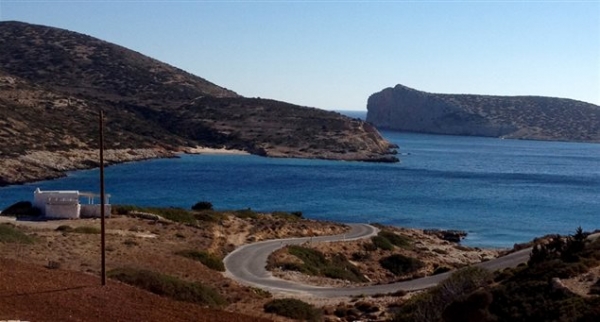 Replete with picturesque trails used by the locals daily in the old days, Donoussa's trails are an opportunity to get acquainted with the island.

Authentic Cycladic landscapes -- scented by summer savory and sage -- and superb views reward any fatigue that may be experienced.

Following are some suggestions:

The trail starts from the main square of Stavros, crosses the entire northern and northwestern side of the island before ending at the picturesque settlement of Kalotaritissa.

About halfway along the route follow a leftward course to enjoy the view of the bay of Xylobatis.

Then, after entering a dirt road, you will see on the right, the entrance to the old mines of iron, bauxite, copper and emery.

Toward the end of the trail and before you descend to Kalotaritissa, on your right, is the island’s highest peak, Papas, at 385m. An ascent to the top offers some of the most breathtaking views of the Aegean Sea.

The route to the settlement is perhaps the most impressive of the island running along the Ftera ridge, with Papas’s vertical slope on the right.

The footpath continues after Kalotaritissa and the beach of Vlycho, ending at Trypiti beach, which is named after the cavities of its rocks.

This trekking route has a length of 1.1km and it takes about half-an-hour to walk it.The route begins from the main road a little further after the turn into the dirt road that leads to Kedros beach, and ascends in a Z form to the peak of Bitilis.

The peak is susceptible to particularly strong winds and caution is required. The route then unfolds smoothly to the settlements of Ano and Kato Messaria. The two villages were once particularly densely inhabited, as the area was the island’s “manufacturing” hub, with two windmills milling a mixture of wheat and barley and an iron works.

The end of the trail features a stone staircase that brings you onto the main road of the island from where you can continue to Merssini and Livadi beach.

This trail, which connects Merssini with Livadi beach, is 0.9km. long and the trek takes about 30 minutes.

This trail has large elevation differences and is quite steep in places. An offshoot leads to the small beach of Fykio and the small harbor of Merssini.

A detour to the left at the beginning of the trail is recommended for a visit to Merssini’s water spring with the huge plane tree and stone arch.

The stone-paved footpath to the spring and the scaled-down access to Livadi beach were constructed in 2010.

The hull of a German ship sunk during World War II is clearly visible on Kedros’s
seabed.

Along the route you will come to the iron furnace where the mine ores weretransported to and loaded onto ships.

You will then pass by the small cove with the caves of Gerantonis and the superb waters, before ascending to Choristaria, where the millers used to keep their boats in the old days.

Last, after a short ascent you will end at Mylos. From there, you can see on your left Vathy Limenari bay and the Geometric Period settlement that was excavated by archaeologist Fotini Zaphiropoulou in 1967.

This trail starts from the island’s main road at the point where it turns towards the waste landfill. On both sides of the road are the remains of the old settlement of Zali.

Exiting the dirt road, the trail passes above the Plakes area and crosses Sykia.

On the left is Gerogiannis bay and you shortly arrive at Limni. After Limni the route leads to Cape Aspros Kavos –one of the most otherworldly spots in the archipelago. Wander around the all white landscape and enjoy the view to Donoussa’s northern coastline.