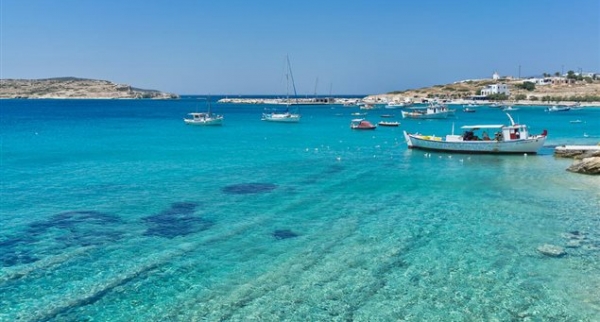 One beach succeeds another along the island’s southern coastline, from Parianos in the west to Pori in the east, and they are all spellbinding.

Ammos: This is the island’s largest beach, sandy and with shallow turquoise waters. It is right next to the port at Chora, with several small shops behind it.

Charakopou or Finikas beach: Charakopou, commonly known as Finikas (Greek for palm tree), is the first beach encountered when taking the island’s seaside track in a direction away from the island’s only town, where the port is located.

Chondros Kavos: A small stony beach in the island’s east, Chondros Kavos is ideal for individuals preferring tranquillity and isolation.

Detis: It is the nearest beach to the port of the island.

Fanos: This large, sandy and popular beach is next to Charakopou, on the eastern coast of the island.

Lakki: This small but impressive pebbly beach on the island’s southern coast has crystal-clear waters and is ideal for those seeking seclusion.

Nero: It is the island’s largest beach, on its eastern coast.

Parianos: Wide, sandy beach in the sheltered bay of Parianos, on the southwestern side of the island.

Pezoulia: A very pretty, secluded beach on the island’s southern coast, with impressive rocks around it and crystal-clear waters.

Platia Pounta (Italida): This is the island’s most popular beach, just five minutes on foot from Fanos. It is also widely known by the name of Italida –the nickname of the owner of the house behind the beach, meaning ‘the Italian lady’.

Pori: This is the island’s farthest and most beautiful beach. Long, with white sand and emerald waters, it is justifiably considered one of the top beaches in the entire Cycladic region.

Porta: Small and quiet sandy beach with fine pebbles on the island’s eastern side.

Spilia: Small beach covered with coarse pebbles on the island’s west side.