Sights and Sightseeing of Koufonisia 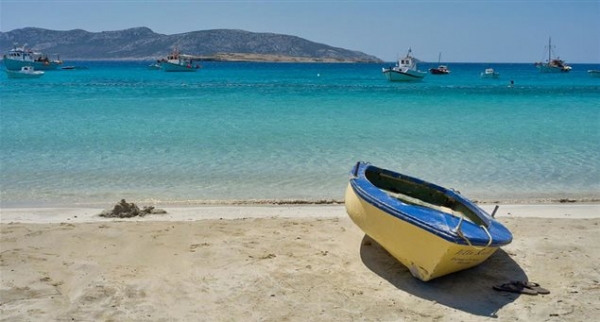 Archaeologists have concluded that Chora lies on the site of a large Roman settlement which extended as far as the cove of Loutro, the location of Agios  Nikolaos chapel, a charming little church,  close to an old and picturesque windmill.

Chapel of Panagia in Kato Koufonissi

The chapel of Panagia (Virgin Mary) in Kato Koufonissi, built in 1561, was originally barely above ground level, to avoid problems with the Ottoman authorities and minimize its visibility from afar for the fear of pirates. The area around it was expanded only in 1970, and in 1990 a patio, toilets and a bell stand were built. A big feast is held at the port of Kato Koufonissi after mass on the religious holiday of Panagia, August 15.

The chapel is located very near an older Byzantine church.

Koufonissi’s Communal Folklore Collection includes a wide array of household and kitchen utensils, farm equipment, traditional garments, furniture, embroidery and various ornaments that testify to the island’s history, customs and traditions. Voluntary work by friends of the island and donations of items from local households over many years helped establish this collection, aimed at
preserving the island’s history and cultural heritage.

A little beyond Pori a path leads to Gala, an odd geological formation with a tiny beach that extends under a rock and ends in a natural pool. Its name (Gala) is Greek for milk and due to the white coloration of the waters by the eroding earth from the rocks around it.

Located a few minutes away from Koufonissi by boat, Kato Koufonissi, (4.3 sq. km) is an ideal half or full day excursion offering a very remote island experience.

Located a few minutes away from Koufonissi by boat, Kato Koufonissi, (4.3 sq. km) is an ideal half or full day excursion offering a very remote island experience.

In the high season, visitors can take advantage of discovering the pristine and relatively secluded beaches of Kato Koufonissi via passenger fishing boats that depart daily from the port of (Ano) Koufonissi.

Here, awaits a natural Cycladic beach haven with crystal clear waters and little signs of civilization, except for the few small summer homes, the taverna that is open during the summer months and the picturesque chapel of Panagia (Virgin Mary) that greets visitors at the small port.

It is important to know that there are no organized facilities on the island and that visitors should come equipped with an umbrella, towels, hat, towels, sunscreen, water etc.

Hikers can take the challenge to explore the island on foot, keeping in mind that the paths are not numbered trails, but rather farmers’ paths, albeit not too rugged and manageable with caution. It may take a few hours, so make sure that: 1) you have appropriate gear (shoes, hat, water, etc,) and 2) the time as to not to miss the return boat back to (Ano) Koufonissi.

The passenger fishing boat drops off and picks up at the small port where the taverna and the chapel are as well as at Nero beach.

Here is a quick guide to the beaches on Kato Koufonissi:

About 1 hour away by foot from the first drop off point and accessible too, directly via passenger boat is Nero, the island’s largest and most popular destination. This beach, on the eastern coastline features thick sand and tiny pebbles and rocks.

Another beach within hiking distance-- for those who are up for it -- is Pezoulia. About an hour away by foot from Nero this is a secluded beach on the island’s southern coast with thick sand, tiny pebbles, inside rocky terrain and crystal-clear waters.

There is one more beach on the north side of the island, Fykio, that is a bit more difficult to get to and tends to get windy as its exposed to a northern wind. However, on a non-windy day it might be worth the trek.
And remember: Don’t miss the boat.

Good to know: Each year, on the 15th of August, the little white Church of the Virgin Mary celebrates. The little passenger boats transport parishioners and visitors to Kato Koufonissi to partake in the liturgy held there and to enjoy a meal afterward.

Between the beaches Platia Pounta and Pori is "Pissina," a  spacious area surrounded by rocks,it communicates with the sea, and becomes natural "swimming pool".

The remains of Roman baths can be seen in the Loutro area of Agios Georgios (Chora). Excavations in Chora and other parts of the island have brought to light objects dating to the Hellenistic and Roman periods. Archaeologists have concluded that Chora lies on the site of a large Roman settlement which extended as far as the cove of Loutro.

The area between the beaches of Platia Pounta and Pori has some interesting geological formations. The most impressive is Mati tou Diavolou, a huge hole in the interior of a cave from where the sea waves gush in.

The Nikitas Simos Folklore & Archaeological Collection, exhibited in the garden of Villa Ostria in Agios Georgios, may be small, but it provides a great deal of information about the area’s past. In a well-preserved stone building of 1852, which used to be the first primary school of Koufonissi, now houses the cafe -bar «School». The place offers lots of information about the architecture of theperiod.

The Altar of Prophitis Ilias

The Church of Prophitis Ilias commands the highest point of the island, at 114m, and is built on the site of an early Byzantine shrine. The altar of the present church comprises two blocks of an ancient column and a piece of marble that were part of the older church. So were the stones used to build the wall on which the icon of the prophet rests.  Local residents walk to this point every year on the day dedicated to the saint for vespers service and dispensing of holy bread.

At the northeastern tip of Ano Koufonissi, north of Pori beach, in the area «Xylobatis» are the two caves of Xylobatis, tucked away in the cove of the same name. The first is tube-shaped and open at both ends, while the second has a small beach inside - ideal for cooling off.

On full moon nights, the outline of the neighboring island of Keros gives the impression of a sleeping couple. The woman, pregnant and in a leisurely position, appears to rest her head on the man’s head, which gives a clear profile.

In the traditional boat maintenance yard, in the Loutro area near Chora, visitors can see work on fishing vessels carried out in exactly the same way as several decades ago.