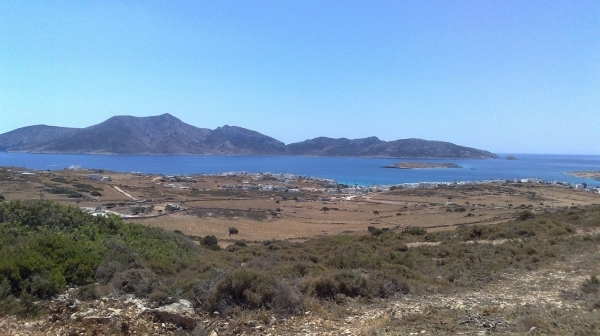 Keros is an uninhabited Greek island in the Cyclades about 10 km (6 mi) southeast of Naxos. Administratively it is part of the community of Koufonisia. It has an area of 15 km2 (6 sq mi) and its highest point is 432 metres (1,417 ft). It was an important site to the Cycladic civilization that flourished around 2500 BC.

Keros is especially noted for the flat-faced Cycladic marble statues which later inspired the work of Pablo Picasso and Henry Moore.The "Keros Hoard" is a very large deposit of Cycladic figurines that was found on the island of Keros.

In 2006-2008, the Cambridge Keros Project, co-directed by Colin Renfrew with others, conducted excavations at Kavos on the west coast of the island. This general area is believed to be the source of the so-called "Keros Hoard" of fragmentary Cycladic figurines. The material excavated in 2006-2008 includes Cycladic figurines, vessels and other objects made of marble, all broken prior to deposition and most likely broken elsewhere and brought to Kavos for deposition. The lack of joining fragments shows that only a part of the broken material was deposited here, while ongoing studies of the pottery and other material show that material was brought from multiple sources for deposition here.

In 2007-2008, the same project identified and excavated a substantial Cycladic period settlement on the nearby island of Dhaskalio. A large area has been excavated, revealing a substantial building 16 metres long and 4 metres wide — the largest from this period in the Cyclades — within which was discovered the ‘Dhaskalio hoard’ comprising a chisel, an axe-adze and a shaft-hole axe of copper or bronze. In addition to excavation, survey of the islet showed that most of its surface — a total of 7000 m2 — was occupied during the Early Bronze Age, making this the largest site in the Cyclades. Specialist studies for the geomorphology, geology, petrology, ceramic petrology, metallurgy and environmental aspects (botanical and faunal remains, phytoliths) are in progress. No more fieldwork is planned prior to final publication of the 2006 to 2008 seasons. Publication of this important work is underway and expected in four volumes to appear in 2012 and 2013.

The activities at this site have now been dated 2750 to 2300 BC, which precedes any identified worship of gods in the Aegean.